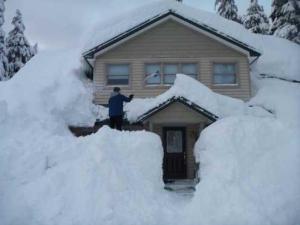 Alaska, America’s so-called Last Frontier, is not usually as snowy as many think especially the coastal areas which often get much more rain than snow thanks to the relatively warm Pacific Ocean.

But the Alaskan National Guard has arrived to dig out the coastal town of Cordova, which has seen 3 metres (10 feet) of snow in only a week.

Snow drifts in the town of 2,000 have trapped some residents in their homes.

Roofs have collapsed yet no injuries have been reported so far in Cordova.

Alaska officials have declared a state of emergency with so many storms in such a short period of time.

Further north, U.S. Coast Guard and Russian vessels are attempting to reach Nome, which has been cut off by ice and is facing a fuel shortage. 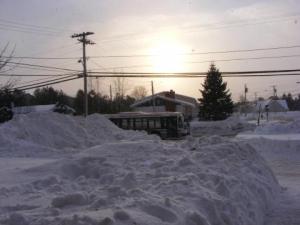 MONCTON, NB – After being bombarded by snow last winter, the City of Moncton has gotten off easy so far this year.

Spokesperson Paul Thomson, one snowstorm after another left the Hub City with a $2 million deficit for the 2011 fiscal year (January to December).

Thomson says the city wants to do more in-house plowing and snow removal in 2012 as opposed to contracting out to avoid another deficit.

The city has hired more workers and leased more snow removal equipment to accomplish that.

One snowstorm after another last winter in Moncton led to 120 cm of snow on the ground by mid-February, a new record according to Environment Canada. 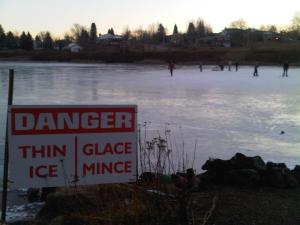 Although it has been a cold week in Greater Moncton with four nights dipping below -10 C and one night dropping to -15.8 C, ice conditions are still not safe for leisure activities such as skating.

The City of Moncton announced today that Jones Lake and Irishtown Pond still have thin ice.

UPDATE – Skating and hockey were deemed safe on Jones Lake as of 08 January and on the same day the City of Moncton opened the community skating rink in the plaza at Moncton City Hall. 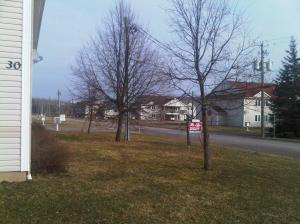 The jetstream has surged northward across western North America bringing Arctic air to much of the East as far south as Florida and allowing warm air to envelop the Prairies and U.S Great Plains.

Lows this morning in Florida dipped to 6.1 C in Miami and -5.6 C in Jacksonville while the U.S. Northeast had its coldest temperatures since last winter with Washington, DC falling to -8.3 C, New York City at -10.6 C and Boston at -11.7 C.

Meantime, it felt like spring on the Prairies today with Calgary reaching a record high of 15.3 C, Maple Creek, SK hit 16.4 C and even normally frigid Manitoba climbed above freezing with Melita, SW of Brandon, setting a new record of 6.1 C.

After a last-minute White Christmas in Greater Moncton, it turned out to be a green New Year’s Day in the region.

The snow and cold that arrived Christmas Eve disappeared over the holiday week with rain and milder temperatures turning things stark and green again.

However, forecasters say the mild air will be replaced by the arrival of Arctic air this week which will bring temperatures down considerably across eastern North America.