When you think about the summer of 2015, August will definitely stand out in Southeast New Brunswick.

Warm, sultry days were common with an eight day stretch of daytime highs reaching 29 C or higher in Greater Moncton at mid-month.

If there was a downside, it would be how dry it was with the region receiving less than half of its normal rainfall during August. 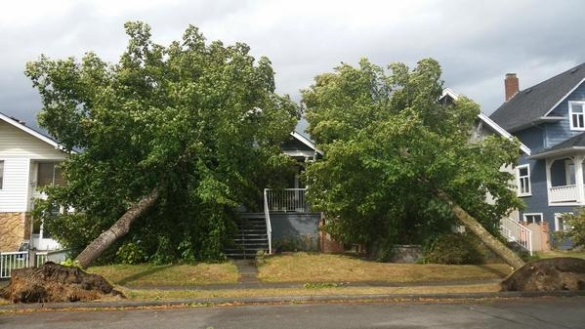 Strong winds gusting up to 80 km/h brought down trees and power lines in Greater Vancouver and British Columbia’s Lower Mainland.

At the peak of the wind storm, about half-a-million customers were without power in the region but crews had restored most by Sunday morning.

Vancouver officials blame a summer drought for making trees weaker and more susceptible which is why many came crashing down on homes and vehicles.

Environment Canada warns that more wind and rain is expected to impact the region over the next couple of days.

Tropical Storm Erika has claimed almost 20 lives in the Caribbean after almost 400 mm of rain fell over some islands including Dominica with fast-moving floodwaters sweeping cars and homes away.

The U.S. National Hurricane Center says Erika will likely impact Florida by Monday which has prompted the state governor to declare a state of emergency.

Forecasters say Erika will likely be downgraded by the time it reaches the U.S. mainland.

A high pressure system coupled with a cool air mass brought frost and snow to Alberta late Friday and Saturday especially the Rockies and the foothills.

Parts of Calgary saw light snow but nothing was officially measured at the airport and much of the white stuff fell at higher elevations outside the city.

Most Albertans took it in stride since although August snow is rare it is not that unusual.

Temperatures have already recovered to more summer-like values with Environment Canada calling for highs in the low to mid 20s Celsius for the next few days.

July was Earth’s hottest month in at least 135 years of record keeping according to the U.S. National Oceanic and Atmospheric Administration

One of the exceptions was Atlantic Canada where the Maritimes had a cooler than normal July while Newfoundland was much colder than average. 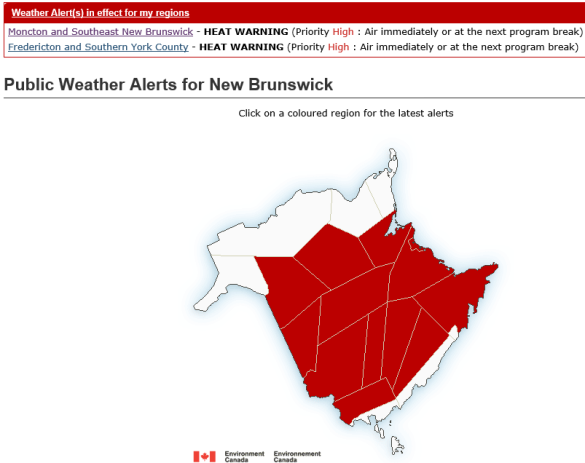 For the first time this summer, Environment Canada has issued a heat warning for Greater Moncton and Southeast New Brunswick.

Humidex values between 35 and 40 degrees are being experienced inland across much of New Brunswick today.

Conditions are expected to persist this afternoon and then gradually diminish this evening as temperatures drop in the low 20’s overnight.

Another period of hot and humid weather is expected for Wednesday before subsiding at night.

Drink plenty of liquids especially water before you feel thirsty to decrease your risk of dehydration.

Heat warnings are issued when high temperatures or humidity are expected to pose an elevated risk of heat stroke or exhaustion.

It’s now mid-August and I was starting to give up hope we would have a heat wave this summer in New Brunswick.

But low and behold, a Bermuda High and a favourable jet stream pushed the temperature in Greater Moncton to 31.8 Celsius today – the warmest so far in 2015.

The hotspots in the province today were at Bathurst, Fredericton and Kouchibouguac which all reached 33 C.

The heat continues for the next few days in the region.

The summer of 2015 so far in Southeast New Brunswick could be called pleasant with periods of rain and cloud thrown in for good measure.

But something has been missing this year – where’s the heat?

The last time the thermometer topped 30 C in Greater Moncton was back in the late spring when it topped that mark on 27 May.

A couple of times we have come close at 29 C but a heat wave of any sort has been noticeably absent.

Environment Canada is calling for a warming trend this weekend which could culminate in a high of 31 C on Monday. 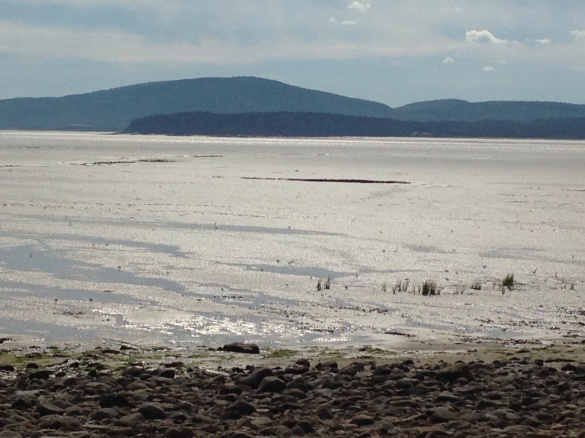 Millions of shorebirds including sandpipers are converging on the upper Bay of Fundy this week – as they do every August – to feast on shrimp and other nutrients on the mudflats during low tide.

The shorebirds lay eggs in the Arctic in the spring and fatten up here in a mid-summer stopover to prepare for a 72-hour non-stop flight to South America where they spend the winter.

Afterward, the tiny birds head north again in the spring and the cycle repeats.

Weather conditions have been favourable with warm, sunny days and a brief but much-needed rain yesterday to coincide with the annual migration.

A beautiful day in Southeast New Brunswick with just a few passing clouds was perfect for the flight of a hot air balloon over Greater Moncton.

An intense low pressure system in the Atlantic Ocean brought a lot of rain to Nova Scotia’s Eastern Shore and Cape Breton Island yesterday with more than 100 mm recorded in some areas.

While there was a lot of cloud over New Brunswick, only a trace of rain was recorded in Moncton.

Environment Canada reports less than 2 mm of rain has fallen so far this August but July started off the same way and became very wet by mid-month.