Warm, summer-like weather continued in Greater Moncton throughout most of September.

Both daytime highs and overnight lows remained mild until temperatures dropped dramatically during the last week of the month.

Rainfall was below normal but even more unusual was New Brunswick was not affected by any post-tropical storms as is typical in early autumn.

Upwards of two months worth of rain has fallen in just a few days in a corner of Southwestern Ontario which includes Windsor and Tecumseh.

The normal September rainfall in the region is just under 100 mm with as much as 195 mm falling in some areas this week prompting a state of emergency. 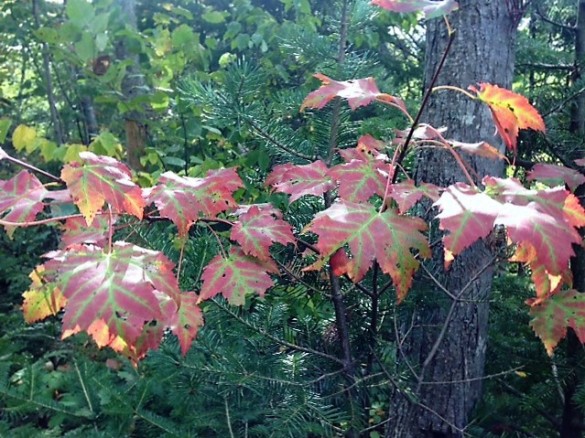 Autumn only began a few days ago but it is already feeling fall-like and a frost advisory has been issued for most of New Brunswick.

Environment Canada says a cold air mass will remain over the province with overnight low temperatures approaching zero in some areas.

Frost is expected to be more significant in low lying areas away from coastal waters.

Incidentally, the average first frost date in the fall is 27 September.

The low in Greater Moncton this morning was 2.8 C with patchy frost reported.

UPDATE: On Sunday morning, the temperature fell to 1.8 C.

Autumn arrived in New Brunswick at 11:21 AM (Atlantic Time) today.

The autumnal equinox occurs when the sun is directly overhead at the equator and days and nights are about equal in length.

The sun continues to move south of the equator and the amount of daylight decreases until the winter solstice (shortest day of the year) on 21 December.

The leaves are just starting to change colour in Greater Moncton.

Given the dry summer in much of the Maritimes, experts say the fall colours may not be as vibrant and the leaves could drop off earlier than usual.

I had to make at least one more trip to Aboiteau Beach in Cap-Pele yesterday before the official end of astronomical summer.

It turned out to be a beautiful day with just a few clouds, an afternoon high near 24 C and the water of the Northumberland Strait was still warm.

The beach was quiet with only a handful of sunbathers and many who arrived chose to go for a stroll along the water’s edge.

Much needed rain fell today but it was still warm and humid with a high near 20 C. 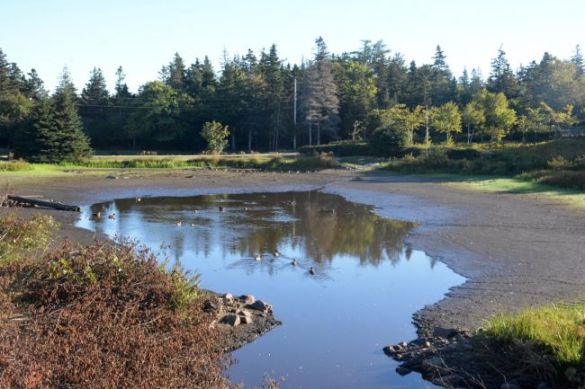 While it has been dry this summer in parts of New Brunswick, no where has it been drier in the Maritimes than in southwest Nova Scotia.

Meteorologists say while the jet stream normally flows through the middle of the region providing adequate amounts of rain, it was pushed farther north this summer due to the Bermuda High which has been northwest of its usual position.

As a result, rainfall in northern New Brunswick has been above average while southwest Nova Scotia has only received 32 percent of its normal summer precipitation.

For example, Yarmouth had 87 mm of rain during June, July and August which is well below the average of 268 mm.

Emergency management officials say at least 1,000 households have run out of water and bottled water donations from major retailers are being shipped to affected communities.

If you liked this summer in Southeast New Brunswick, chances are you will like this autumn too as the Weather Network unveils its fall 2016 forecast.

Warm, sunny days are expected to continue for at least the first half of fall.

After a dry summer, rainfall will be near normal with the first snow possible by late November.

Forecasters will be keeping a close eye on the Atlantic hurricane season and how it may affect the Maritimes especially since it is already off to a busy start.

Palm trees were toppled in Cabo San Lucas and power was knocked out power to thousands in the resort community.

Authorities say a shrimp boat capsized in rough seas in the Gulf of California, killing two people and leaving three others missing.

The U.S. National Hurricane Center said the storm would make landfall again in Sonora state before bringing heavy rain to the American desert states of Arizona and New Mexico.
by awd1970

The warmth of summer is expected to continue well into September in Southeast New Brunswick according to Environment Canada.

Meteorologists say the waters surrounding the Maritimes (Bay of Fundy, Atlantic Ocean, Northumberland Strait and Gulf of St.Lawrence) are about 2-3 Celsius above normal for this time of year.

Warm water generates energy which will help elevate temperatures throughout the region.

Precipitation is difficult to predict at this time of year since remnants of a post-tropical storm could easily deliver a hefty rainfall in just a few hours. 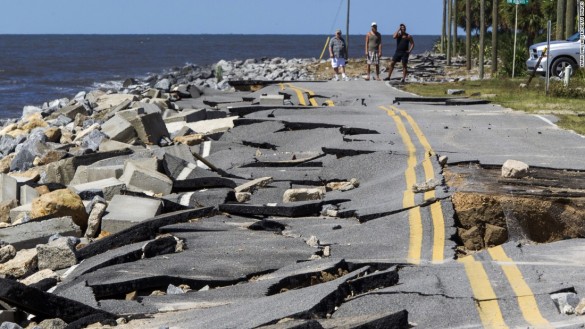 Damage to a road along Florida panhandle coast from Hurricane Hermine, 02 Sept 2016 (CNN)

The first hurricane to hit Florida in 11 years, pounded the state’s panhandle region early this morning.

Hermine was packing winds up to 130 km/h when it came ashore before quickly being downgraded to a tropical storm.

Hermine knocked out power to hundreds of thousands and torrential downpours brought flooding to low-lying areas.

The storm is expected to move north up the Atlantic coast and could even impact Nova Scotia and New Brunswick early next week.