Environment Canada says only October 1913 was slightly warmer since records began in 1881.

Temperatures did fall below freezing on 7 days with some scattered frost but the month escaped a hard frost and vegetation continued to flourish.

Rainfall was more than 30 percent below normal in Southeast New Brunswick continuing a prolonged dry period which began in early summer.

An intense low pressure system which absorbed the remnants of Tropical Storm Philippe unleashed its fury on Ontario, Quebec and the Maritimes after racing through the Northeastern United States.

Environment Canada reports more than 100 mm of rain (a month’s worth) fell in Ottawa turning some streets into rivers in the National Capital (2017 is now its wettest year ever) and neighbouring Gatineau.

Strong winds gusted to 93 km/h at Ile d’Orleans with rainfall amounts of up to 90 mm across Southern Quebec.

Western New Brunswick felt the brunt of this storm in the Maritimes while Greater Moncton recorded 25 mm of rain and a peak wind gust of 69 km/h. 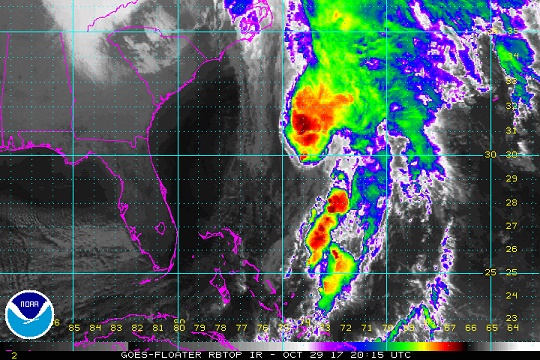 Tropical Storm Philippe, the 16th named storm and 18th tropical system of the 2017 Atlantic hurricane season, is no more according to the U.S. National Hurricane Center.

The storm brought heavy rain to central Cuba and the Bahamas in addition to spawning several tornadoes when it crossed south Florida.

However, Environment Canada says the remnants are combining with a low pressure system which will bring strong winds and heavy rain to New Brunswick on Monday.

~20mm of rain overnight in #Halifax, up to 44mm down the coast. Not nearly as much as SW #NewBrunswick but still significant. #NSwx #NSstorm pic.twitter.com/5QLEhoUUo1

A slow moving frontal system brought heavy rain to western New Brunswick with about 20 mm falling per hour in the southwest.

Environment Canada reported 174 mm of rain in St. Stephen over a two day period which is a shocking amount considering about 180 mm fell from June to September.

Other amounts include 112 mm in Edmundston, 93 mm in Woodstock and 74 mm in Fredericton.

Rainfall totals were much lower in Southeast New Brunswick where only 27 mm fell at the Greater Moncton International Airport.

Tropical air with this system broke more record highs in Atlantic Canada with a maximum of 23.4 C in Moncton and Bouctouche, 23.5 C in Cheticamp, 22.0 C in Deer Lake and 21.2 C in Happy Valley-Goose Bay.

Central New Brunswick is experiencing a moderate drought while much of the rest of the province is abnormally dry except for the Acadian Peninsula according to Agriculture Canada.

Forecasters say two weather systems could bring as much as 100 mm of rain on Thursday and Friday which is welcome relief for a prolonged dry period which began in early summer.

Environment Canada has issued rainfall warnings for western and southern New Brunswick but the Southeast is expecting less than 40 mm.

Meantime, more record highs were broken across the Maritimes today as southerly air continued to push temperatures well into the 20’s C.

Along the Riverfront Trail in Moncton, 21 October 2017 (Dearing)

Greater Moncton was the warmest spot in the province climbing to 23.1 C which broke the old maximum temperature of 22.8 C from 1928.

Greenwood was among six communities in Nova Scotia breaking records with a high of 24.5 C.

Environment Canada says the Maritimes is enjoying a late October heat wave because the region is sandwiched between low pressure and high pressure allowing warm, southerly air to move northward.

Smoke from fire on base from the Jemseg bridge yesterday #fire #gagetown pic.twitter.com/94dzlS0xFv

Three forest fires are continuing to burn at Base Gagetown with drifting smoke causing poor air quality in Oromocto and nearby Fredericton.

Training exercises on the sprawling military base reportedly ignited the fires in recent days which have not posed any threat to homes or structures.

A smoky sky over the New Brunswick capital city prompted public health officials to urge children, seniors and anyone with lung conditions to stay indoors.

Water bombers have been attacking the fires which have burned over 1,000 hectares to date amid very dry conditions. 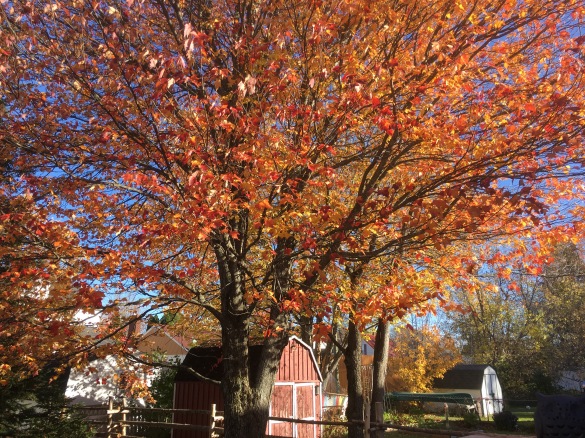 The fall foliage in Southeast New Brunswick is now past peak and the leaves are starting to tumble to the ground.

Typically a strong wind and/or rain event will bring down most remaining leaves from the trees with maples the first to shed and oaks among the last.

Forestry experts say unseasonably warm weather across the Maritimes this autumn have muted some fall colours.

Rich, vivid displays are most common when days are sunny but cool and nights are cold.

Schools and businesses closed in Ireland when the remnants of Hurricane Ophelia brought destructive winds up to 160 km/h which downed trees and power lines creating widespread power outages.

Flights, ferries and even buses were cancelled and at least three deaths are attributed to the storm which officials say is the worst to hit Ireland in 50 years.

Ophelia formed in the eastern Atlantic on 11 October and became a Category 3 hurricane three days later.

The U.S. National Hurricane Center says Ophelia was the furthest east ever recorded for an Atlantic hurricane.

Fire officials say wildfires will get worse before getting better in the wine country of northern California.

High winds and dry conditions have fuelled the flames destroying entire neighbourhoods in Santa Rosa and at least 13 wineries been either damaged or completely wiped out.

The death toll stands at about 30 with many residents being found in their homes not being able to escape the fires.

More than 3,500 homes and buildings have been destroyed so far and firefighters continue knocking on doors trying to evacuate thousands more being affected by the catastrophic blazes.