Just days into the new year, a low pressure system has brought mostly snow to Atlantic Canada especially near the ocean.

For most of Nova Scotia, it was winter’s first major snowfall with up to 15 cm at Halifax Stanfield Airport and nearly 40 cm in Sydney.

The storm grazed Greater Moncton with only 3 cm of snow.

After leaving the Maritimes, the system brought 42 cm snow to St. John’s, Newfoundland and 30 cm to the Burin Peninsula with a peak wind gust of 106 km/h in Bonavista. 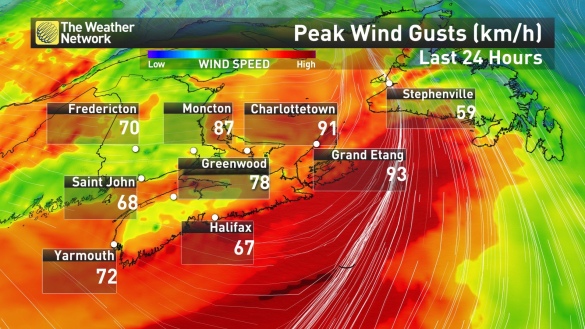 A fast-moving cold front passed through the Maritimes today on its way to Newfoundland.

Powerful winds developed as a result which knocked out electricity to tens of thousands of customers across New Brunswick, Prince Edward Island and Nova Scotia.

Many locations across Newfoundland had hurricane-force gusts including Bonavista at 126 km/h, Wreckhouse at 107 km/h and St. John’s at 104 km/h.

The cold front also affected Southern Quebec yesterday with gusts of more than 80 km/h in Montreal and Quebec City.

Gander recorded almost 80 mm of rain (almost a month’s worth), the southern Avalon Peninsula had high water swells of 6 to 8 metres above normal while Bonavista and Cape Pine recorded wind gusts above 100 km/h.

The Canadian Hurricane Centre issued its final bulletin for Chris early Friday as the storm sped off into the North Atlantic.

While not uncommon, the end of May is still late – and record breaking – for a significant snowfall of 36 cm in Gander.

A low pressure system brought strong winds and rain which turned to snow over northeast Newfoundland when the temperature fell to the freezing point.

Burgeo recorded a peak wind gust of 95 km/h as did Bonavista which also picked up 40 mm of rain.

Snowfall totals as of 9am NDT, 10 April: