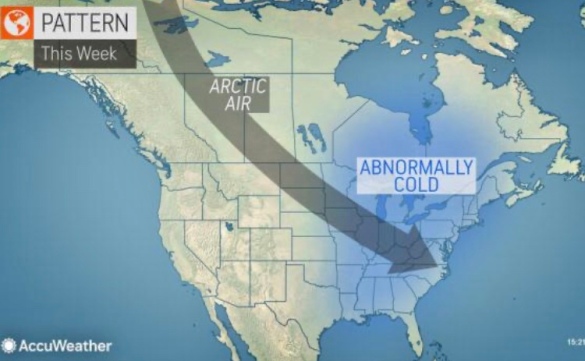 Temperatures dropped to freezing all the way to the Gulf of Mexico.

Meteorologists say the early icy blast was more typical of January than mid-November.

New record lows were set in Ontario where CFB Borden fell to -24°C and Toronto Pearson Airport dropped to -14°C.

The coldest low of the season was set in Greater Moncton today at -10°C and just a couple degrees shy of the record.

The Southeast New Brunswick forecast calls for a roller coaster ride this weekend followed by more seasonable temperatures next week. 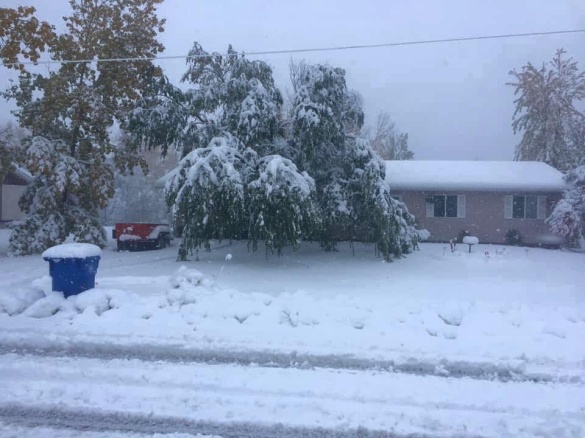 The Manitoba government declared a state of emergency on Saturday after a powerful storm dumped heavy rain, freezing rain, snow and wind to southern portions of the province this week.

Amid the early winter blast, Manitoba Hydro is trying to restore electricity to thousands of residents after numerous trees and branches – many still covered in leaves – fell onto power lines with winds gusting up to 100 km/h.

The storm was so bad it forced the temporary closure of the Trans Canada Highway from Winnipeg to the Saskatchewan border.

Southern Manitoba got blasted after a Colorado Low moved in from the United States where it brought dramatic temperature drops and heavy snow to the Great Plains states.

The next concern for local emergency measures officials will be flooding as the snow melts given the rising temperatures forecasted over the next few days.

Snowfall totals as of 1pm CDT on Saturday, October 12th:

Tropical Storm Barry continues churning in the northern Gulf of Mexico with sustained winds of more than 100 km/h.

The U.S. National Hurricane Center says Barry is expected to make landfall as a hurricane along the coast of Louisiana on Saturday morning.

The city of New Orleans is on alert for heavy rain (up to 500 mm) and flooding along with storm surges although no evacuations have yet been ordered.

This is the first tropical system to impact the United States in 2019.

After landfall, Barry is expected to weaken and head northward through the Mississippi Valley.

A major winter storm brought heavy snow and mixed precipitation from the American Midwest to the mid-Atlantic states over the weekend.

The snow began falling in Kansas and Missouri with some areas getting almost 50 cm.

The storm knocked out power, disrupted air travel and created slippery highways with numerous collisions including an Illinois crash which killed a police officer.

Freezing rain led to a build-up of ice on surfaces in North Carolina and Virginia.

Between 15 and 30 cm of snow fell over the Washington, DC area – its heaviest snowfall in three years – which closed schools and federal government offices on Monday.

Forecasters say melting during the day would create hazardous black ice after sunset as temperatures fell back below freezing.

The storm system has moved out into the Atlantic but will brush Cape Breton Island and eastern Newfoundland on Tuesday.

Heavy rain is not exactly being welcomed in California despite recent wildfires in the northern and southern parts of the state which have been ferocious and deadly.

Officials are now warning about the threat of mudslides as rain falls on dry or parched land and it runs downhill bringing rocks and debris with it.

About 100 mm of rain could fall in the north where the so-called Camp Fire has wiped out the mountain town of Paradise, north of the state capital Sacramento, claiming more than 77 lives with 1,000 still missing.

In the south, nearly 50 mm could dampen the so-called Woolsey Fire in the western suburbs of Los Angeles which has claimed at least three lives and destroyed some of America’s most expensive real estate including the homes of numerous Hollywood celebrities.

The cause of both fires is still under investigation but a lawsuit alleges problems with electricity transmission lines may have played a role. 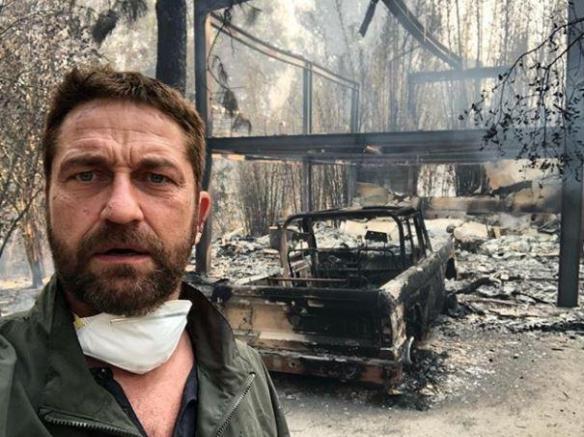 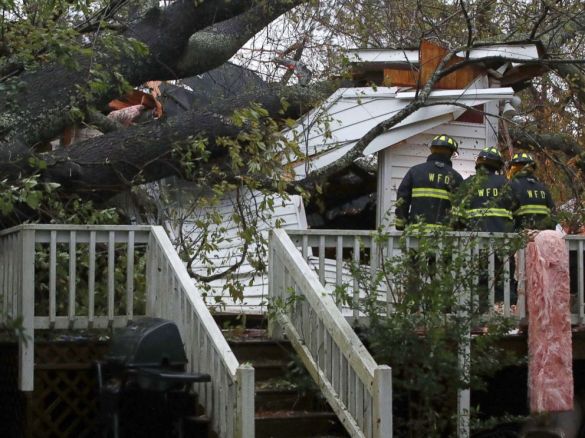 Since making landfall near Wilmington, North Carolina on Friday morning as a Category 1 hurricane, Florence has claimed at least 15 lives.

Strong winds have toppled trees trapping some and even killing others in their own homes.

Now a tropical depression, the storm has been dumping epic amounts of rain (800 mm or more) on North and South Carolina which has caused flash flooding as rivers and streams spill their banks.

First responders have rescued almost 1,000 residents from floodwaters while nearly one million are without power and tens of thousands have sought refuge in emergency shelters.

Many highways have been left impassable and officials are urging drivers to stay at home and off the roads.

Only a month after California endured searing wildfires, the southern part of the state is now grappling with deadly mudslides thanks to heavy rain and barren ground from a recently scorched landscape.

Santa Barbara County has been the hardest hit area with hundreds of homes damaged and at least 65 destroyed.

The death toll stands at 17 with almost 30 injured and more than 40 reported missing.

Thousands lost electricity and a portion of a major highway (US 101) had to be temporarily closed due to the mud which covered it.

For the first time in 28 years, the capital of America’s Sunshine State had measurable snow.

Tallahassee may occasionally see snowflakes in winter but today was only the fourth time since 1950 that snow actually accumulated on the ground.

The wintry blast was thanks to a so-called bomb cyclone which originated off Florida’s east coast and is barreling up the Atlantic toward the Maritimes.

The intense storm system also brought heavy freezing rain to South Carolina and blizzard warnings have been posted from Virginia to Maine.

Environment Canada has issued a winter storm warning for Greater Moncton and Southeast New Brunswick with 30 cm of snow/ice pellets and 10 mm of rain as the temperature finally climbs above freezing.

The thermometer has not risen above zero since Christmas Day and seven straight days have been below -10 C.

Irma was downgraded from a hurricane to a tropical storm today after slamming Florida with destructive wind, heavy rain, flash flooding, high storm surges and even tornadoes.

Irma, one of the most powerful hurricanes ever recorded in the Atlantic Ocean, made landfall over the Florida Keys on Sunday before coming ashore near Naples and then heading up the state’s west coast.

Miami was not in the storm’s direct path but was still battered by strong winds which swayed high rise buildings, brought down three construction cranes and downtown streets were swamped.

In northeast Florida, Jacksonville had historic flooding after the swollen St. Johns River spilled its banks and officials said dangerous conditions were expected for several days.

Prior to arriving in the United States, Irma claimed 10 lives in Cuba according to state media after battering Havana and tourist resorts such as Varadero and Cayo Coco where the international airport was destroyed.

More than 3,500 residents of Houston have been rescued since Tropical Storm Harvey began pounding southeastern Texas with more than 750 mm of rain and counting.

Tens of thousands displaced from their homes are being housed at evacuation centres which are now overcapacity forcing many to sleep in chairs or on the floor.

Officials began releasing water from two Houston reservoirs on Monday in order to prevent uncontrollable flooding in the downtown area.

Houston’s two main airports have been closed since their runways are completely underwater.

The Texas Gulf Coast is a key centre of the American oil and gas industry with some of the largest refineries in the United States halting operations.