Smoke from wildfires has drifted into the San Francisco Bay Area of northern California.

Skies have turned a dark orange during daytime hours creating an apocalyptic feel.

Social media users commented about how they had never seen anything like it before.

Unhealthy air quality alerts have been issued for 25 straight days – the longest stretch on record. 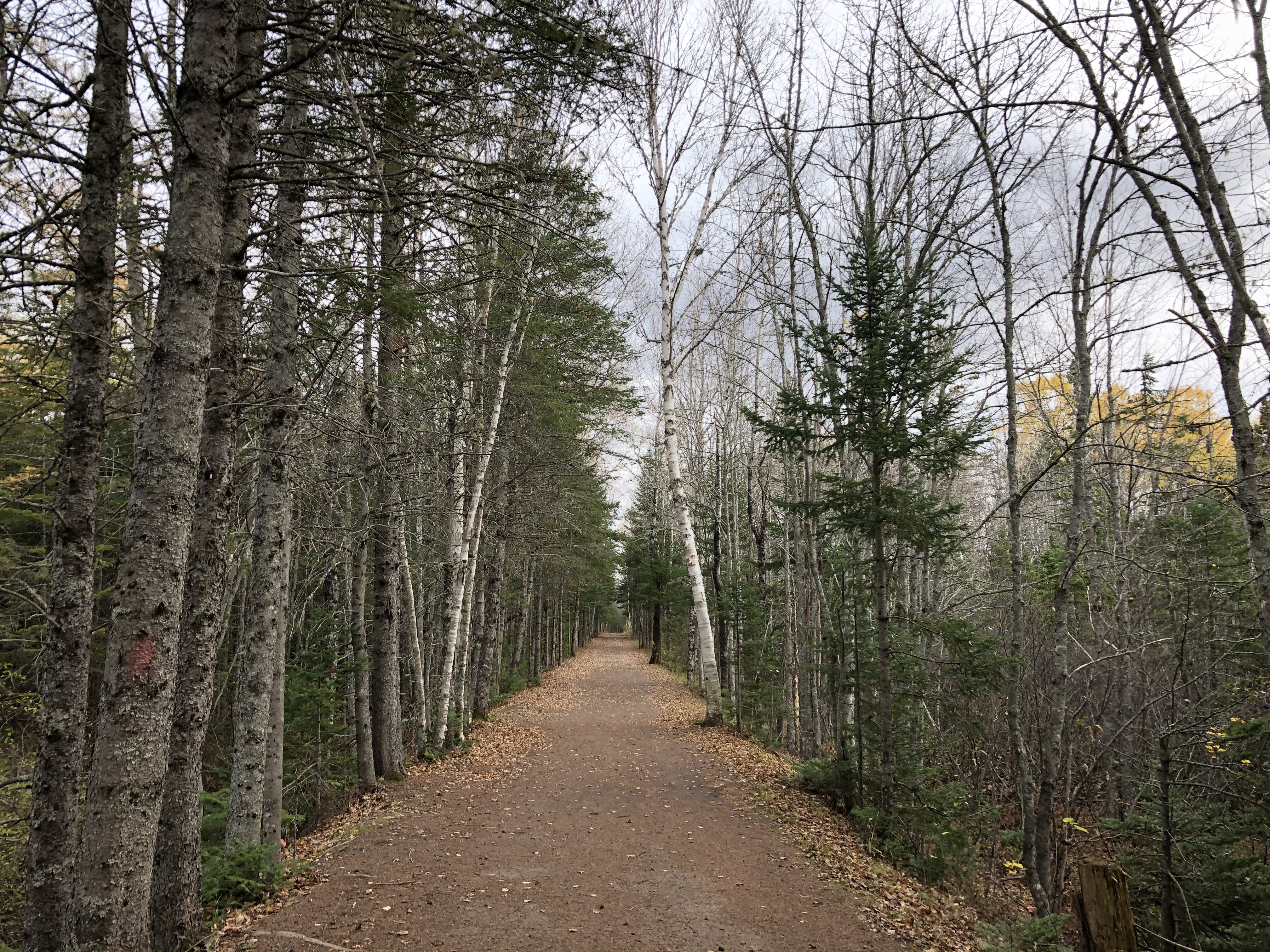 Another low pressure system moved through the Maritimes on Wednesday bringing a lot of rain to the region especially to western New Brunswick.

Winds were also a factor with this storm but for a shorter period of time even though the peak gust was 81 km/h which was slightly higher than last week. 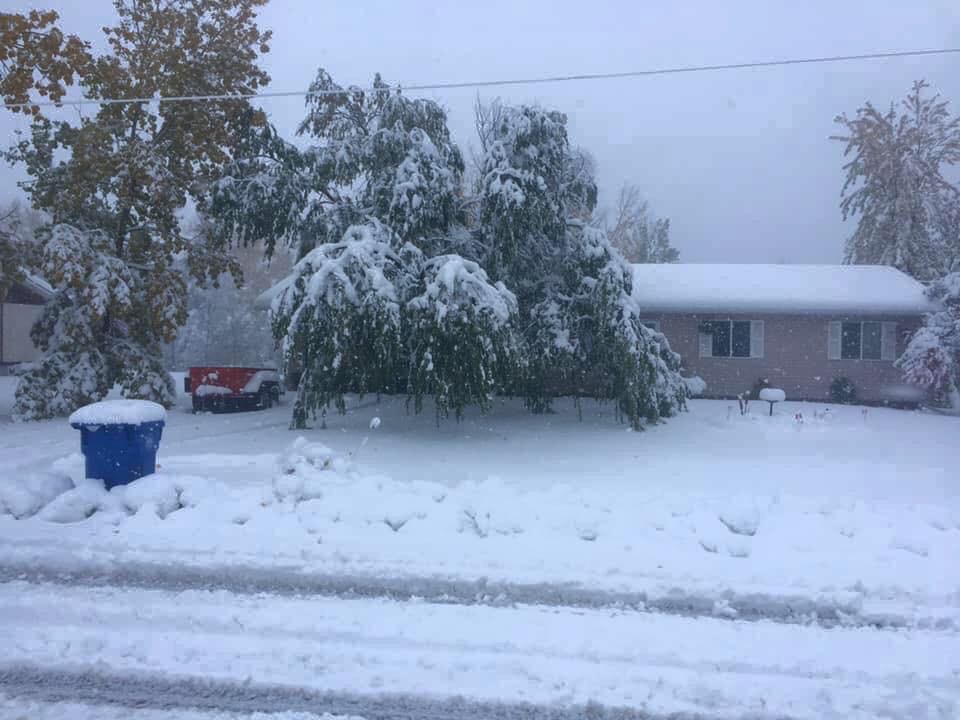 The Manitoba government declared a state of emergency on Saturday after a powerful storm dumped heavy rain, freezing rain, snow and wind to southern portions of the province this week.

Amid the early winter blast, Manitoba Hydro is trying to restore electricity to thousands of residents after numerous trees and branches – many still covered in leaves – fell onto power lines with winds gusting up to 100 km/h.

The storm was so bad it forced the temporary closure of the Trans Canada Highway from Winnipeg to the Saskatchewan border.

Southern Manitoba got blasted after a Colorado Low moved in from the United States where it brought dramatic temperature drops and heavy snow to the Great Plains states.

The next concern for local emergency measures officials will be flooding as the snow melts given the rising temperatures forecasted over the next few days.

Snowfall totals as of 1pm CDT on Saturday, October 12th: 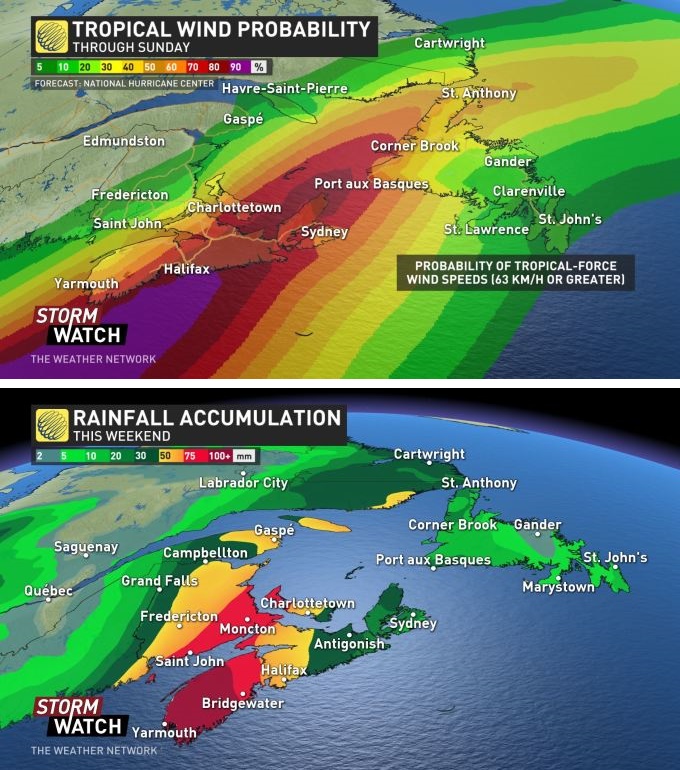 Emergency measures organizations in the Maritimes have been preparing for Hurricane Dorian which is approaching southwestern Nova Scotia with maximum winds of 148 km/h (as of 12pm ADT).

The Canadian Hurricane Centre expects Dorian will make landfall near Halifax on Saturday evening as a Category 1 hurricane.

Residents who live along the Atlantic coast, such as Peggys Cove for example, are being urged to evacuate and move inland.

Long lines were reported at stores and gas stations on Friday as residents scrambled to stock up on food and other supplies.

Hurricane warnings and tropical storm warnings have been issued for all of Nova Scotia including Cape Breton Island, Prince Edward Island and southeast New Brunswick.

Strong winds gusting up to 120 km/h are in the forecast, rainfall amounts could exceed 100 mm and large waves and storm surges are likely along coastlines.

As of 2pm ADT, about 75,000 customers were without electricity in Nova Scotia with some trees toppled over along the province’s south shore.

Post-tropical depression Erin interacted with an incoming low pressure system to produce lots of rain in the Maritimes.

Environment Canada says the heaviest amounts were recorded in northern Nova Scotia and the Annapolis Valley – Parrsboro and Greenwood each had more rain from this storm than all of July and August combined.

Some roads were damaged and even washed out by surface runoff or flooding.

The storm brought tropical air with a high of 23°C in Greater Moncton on Friday but a humidex of 32.

Barry has been downgraded to a tropical depression after making landfall west of New Orleans on Saturday as a Category 1 hurricane.

Although Barry did not bring devastating flooding as some forecasters had originally thought similar to Hurricane Katrina in 2005, parts of Louisiana did receive more than 400 mm of rain which swamped the Mississippi River delta.

Emergency responders rescued at least 90 residents but there were no reports of fatalities.

Remnants of Barry have been moving northward with heavy rain across the American South up to the Midwest. 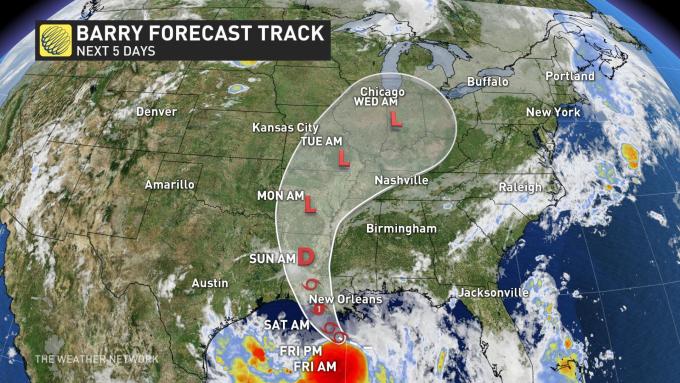 Tropical Storm Barry continues churning in the northern Gulf of Mexico with sustained winds of more than 100 km/h.

The U.S. National Hurricane Center says Barry is expected to make landfall as a hurricane along the coast of Louisiana on Saturday morning.

The city of New Orleans is on alert for heavy rain (up to 500 mm) and flooding along with storm surges although no evacuations have yet been ordered.

This is the first tropical system to impact the United States in 2019.

After landfall, Barry is expected to weaken and head northward through the Mississippi Valley.

The tornado moved east along the Ottawa River before coming ashore on the Ontario side.

In the suburban Ottawa neighbourhood of Orléans, strong winds brought down trees and removed shingles on many homes with one person reportedly injured.

A thunderstorm also produced 2 centimetre hail in the area.

Environment Canada says the tornado was a low end EF-1 suggesting peak winds of 135 km/h and had a path length of at least 25 kilometres. 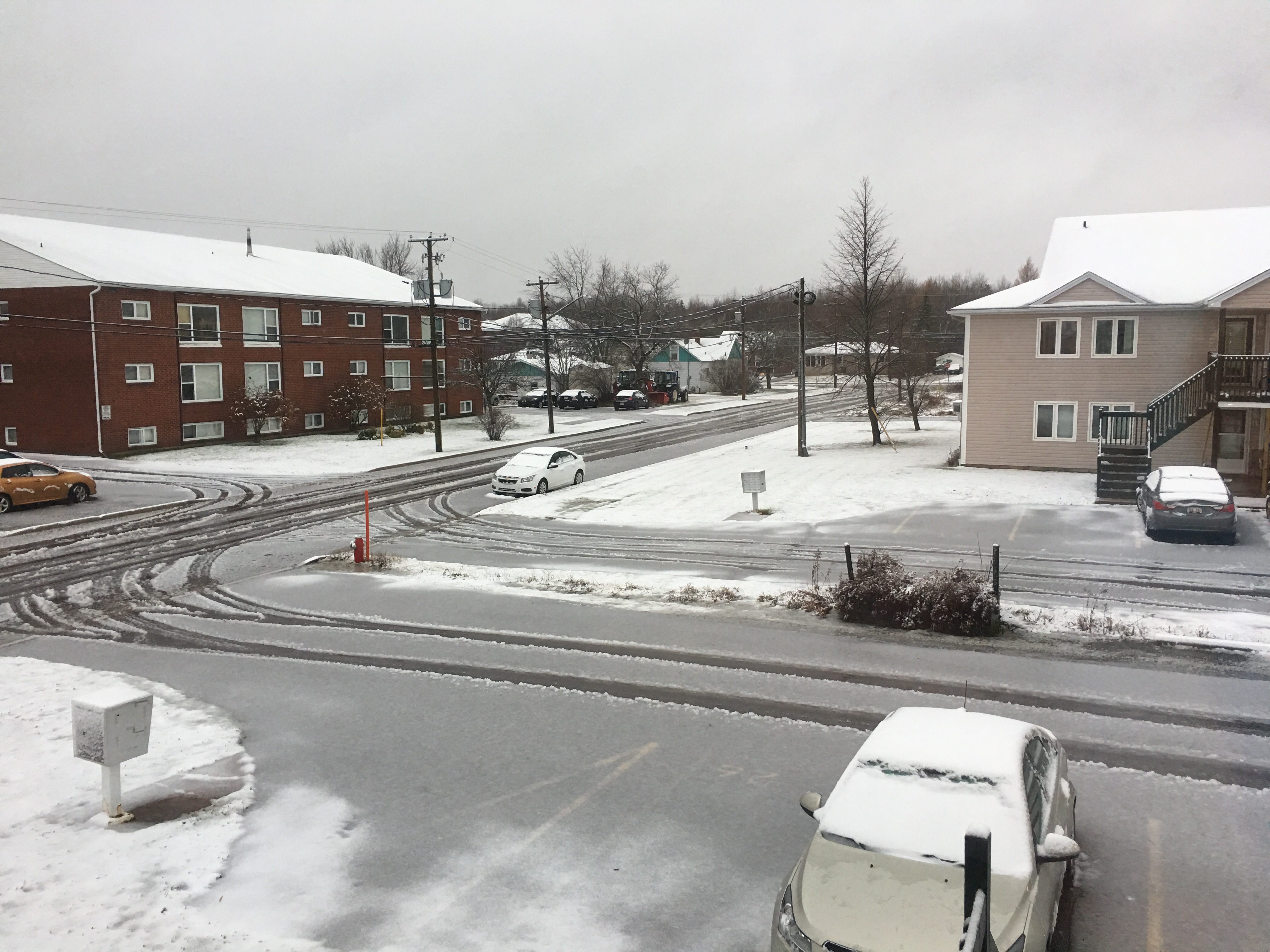 About twice the normal amount of precipitation fell in Southeast New Brunswick during November which began as heavy rain and became heavy snow when it turned colder.

Two major rain events which included hurricane force winds were followed by the first snowfall of the season on the 10th and three more snow events to round out the month.

Greater Moncton had snow cover starting on the 14th and by the 30th, about 31 cm of snow was lying on the ground – almost eight times more than normal.

Temperatures were mild during the first third of the month and became decidedly frigid by the middle with lows near -15 C accompanied by bitterly cold wind chills.

An intense low pressure system moving up from the U.S. Eastern Seaboard brought heavy rain and strong winds to the Maritimes overnight.

The powerful hurricane-force gusts knocked out electricity to more than 100,000 customers in New Brunswick during the height of the storm.

Temperatures were very mild thanks to a southerly flow with highs exceeding 20°C in some areas including a new record of 21.7°C in Cheticamp.